The Pineapple Thief - Your Wilderness

Your Wilderness is the eleventh studio album by British Progressive Rock band The Pineapple Thief, released in August 2016 via Kscope Records.

With Your Wilderness, The Pineapple Thief shift their musical focus away from their exploration of polished rock so evident on 2012's All The Wars and 2014's Magnolia, and back toward contemporary prog. Porcupine Tree/King Crimson kit man Gavin Harrison joins the “Thief” on this outing. Soord also enlisted guests including Supertramp's John Helliwell on clarinet, Caravan's string player/arranger Geoffrey Richardson, Godsticks' guitarist Darran Charles, and a four-voice choir. Harrison's addition can't be overstated. His playing extends the reach of their musicality exponentially.

The album title denotes themes of isolation, loneliness, and alienation - not unfamiliar ones in The Pineapple Thief's works. That said, they've never been explored with such a brooding focus as they are here. The overall textural palette is muted, songs flow in and out of one another without much in the way of dynamic variables, but there's no shortage of excellent music.

Opener "In Exile" is haunted by the sound of Steve Kitch's mellotron hovering behind Harrison's popping snare and tom-toms. They're eventually given flight by Charles' blistering guitar breaks. The chorus contains a small but pronounced hook, making it a perfect candidate for a single.

"Take Your Shot" commences at midtempo, with gorgeous harmonic guitar layers and drum vamps amid ambient space. A middle-section crescendo fueled by Harrison is reined in by stacked choral voices before spiraling guitars wrestle it all free. The chorale, mellotron, strummed acoustic guitars, and Helliwell's free-floating clarinet fills make "Fend For Yourself" one of the album's high points, and a perfect setup for the nearly ten-minute "The Final Thing On My Mind". Like most things here, it commences sparingly and slowly. The emotional resonance in Soord's delivery and lyrics carry the song's weight. The bass and drums add a platform of tension as strings, choir, and monumental guitar breaks explode it.

The songs on Your Wilderness are composed with a deliberately monochromatic dynamic foundation in order to assert the poignant, focused intention in the lyrics. As a result, the instrumental acumen gleams all the brighter. Deliberate or not, the lack of variation creates a series of lovely, sad, but blurry episodes in an extended work. This is a marked return to form for The Pineapple Thief; it delivers back to fans a sound most have been missing for years.

This LP set on 180 gram heavyweight vinyl, includes a digital download of the album and is pressed in Germany. 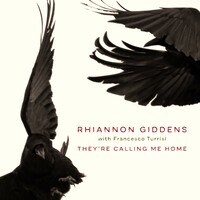 Rhiannon Giddens - They're Calling Me Home