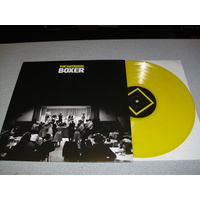 Boxer is the fourth studio album by American indie rock band The National, released in May 2007 by Beggars Banquet Records.

Four albums in they don't do anything radically different on Boxer, but then again, they don't really need to: their literate, quietly anthemic take on indie rock seemed to have arrived fully formed on their 2001 self-titled debut. Boxer just hones in even more precisely and intimately on the heartfelt territory the band covers, with punchy-yet-polished production and orchestration by Padma Newsom, the Aussie classico behind Clogs (a band that also includes Bryce Dessner) giving these songs an intimacy and widescreen expansiveness.

Boxer has their same slow-burning intensity, built from glistening piano lines and big rock guitar chords and the murmuring deep tones of Matt Berninger’s voice.  Yet though these songs are instantly accessible, they are also unusually layered and complex.  Take “Fake Empire”, it begins in a flourish of piano notes, and Berninger dropping casual observations about picking apples and lacing lemonade, and builds from there.  There’s a tempo change, then crazily intense mid-section with brass point and counterpoint and fractious joyful drums.  Not every band could even get this down on tape, but the National makes it sound natural and unforced.

The rocking songs like “Brainy” and “Squalor Victoria” may leap out at your first, but it’s the ruminative ones that burn into your cortex - “Slow Show”, “Start A War”, and “Racing Like A Pro”.  Even on these slower songs, the drums have been turned up a notch, pulsing away in ritual cadences.  “Slow Show”, one of the album’s best cuts, has a galloping rhythm under it, making its doomed romantic lyrics seem somehow more significant, more effortful.  It’s the sort of song that ought to be too mushy, too over-the-top.  Yet somehow paced by plaintive piano and pounding tom toms, feels real and true and even unadorned.

As before, the National’s secret weapon is Padma Newsom.  “Fake Empire” bears, perhaps, the most obvious traces of his influence, breaking into its post-classical brass quartet past the halfway mark, but the subtle warmth of strings, the edgy commentary of orchestral instruments is everywhere. The additional instruments and textures slip effortlessly into the songs.

Lyrics are imagistic, but powerful, always seeming to mean more than they actually say.  There are phrases here that stick, almost immediately, their meaning somehow both obscure and obvious.  “

All these elements - the warmth and humanity and musical complexity, the indelible images and puzzles, the guitar-based rock and classical embellishments - go a certain distance in explaining why Boxer is so good… but they don’t quite explain it.  This album, like all great albums, somehow transcends all the factors that makes it work, absorbing them in a seamless whole.

Check out the tracks: “Mistaken For Strangers”; “Apartment Story” and “Fake Empire”.

This Limited Edition LP reissue with a digital download is pressed in the UK on Yellow vinyl.