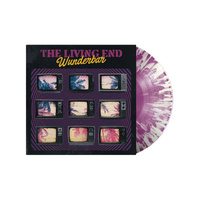 Wunderbar is the eighth studio album by Australian rock band The Living End, released in September 2018 via BMG.

Recorded over a six week period in Berlin during an inspired recording session with producer Tobias Kuhn, The Living End's eighth studio album Wunderbar will see a worldwide release through BMG.

Frontman Chris Cheney explains further; "We're not trying to re-write Dark Side of the Moon or anything. Instead, Wunderbar does what The Living End do best, what's kept hundreds of thousands of fans listening for nearly a quarter of a century: straightforward, heart-pounding, guns blazing rock and roll. I cannot wait to hit the road and get loud!"

This limited LP record is on purple & white splatter coloured vinyl and comes with a digital download code, released via Rise Records.