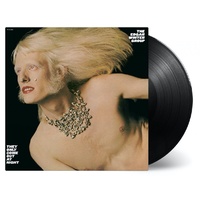 The Edgar Winter Group - They Only Come Out At Night

They Only Come Out At Night is the third studio album by American blues rock musician Edgar Winter (and the first by The Edgar Winter Group), originally released in November 1972 via Epic Records.

They Only Come Out At Night was the first Edgar Winter album released under The Edgar Winter Group name. In 1972 Winter had bought together Dan Hartman (bass), Ronnie Montrose (lead guitar) and Chuck Ruff (drums) to form The Edgar Winter Group. The material on the album was written collaboratively with Winter, Hartman and Montrose all contributing material to the album. Hartman sang lead vocals on the track “Free Ride”, and Winter sang majority of lead vocals, and played a wide range of instruments, including keyboards, percussion, saxophone and other wind instruments.

The album was a huge commercial success, reaching #3 on the US Billboard 200 albums chart, and featured two big hit singles, "Frankenstein" (#1 in the US) and "Free Ride" (#14 in the US).

This sets collects ten outstanding cuts as a true masterpiece of early seventies blues rock, even dabbling in country rock and rockabilly as well.

Besides achieving considerable commercial success, selling more than 2 million copies, the album received many positive reviews from music critics all over the world. It is regarded as one of his classic albums, and has been reissued by Mobile Fidelity Sound Lab, a testament to the quality of the musicianship and source recordings.

This album is a 2020 reissue on 180 gram audiophile black vinyl housed in a gatefold sleeve, pressed in Europe via Music On Vinyl.