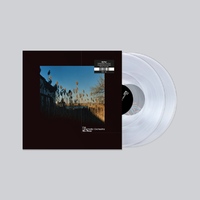 Ma Fleur is the third studio album by British electronic and nu jazz group The Cinematic Orchestra, originally released in May 2007 via Ninja Tune.

No one makes music like The Cinematic Orchestra. Their blend of soul, jazz, beats and widescreen arrangements is beloved the world over. 'Ma Fleur' is the first full studio album by Jason Swinscoe's ensemble since 2002's 'Everyday' (which sold more than 100,000 copies worldwide).

The record was written as the soundtrack to an imagined film (that may well get made). He collaborated on his ideas for this new album with two writers, who came back with short story scripts in which each scene represented a story of a different time in life, expressing the emotions which underpin the journey from birth to death. Swinscoe, now based in New York, then filled out the arrangements with the band and then recruited suitable vocalists.