The Chats is the debut EP by Australian punk rock band The Chats, originally released in November 2016.

The band members came together at high school and recorded their first EP, whilst at school. The Chats 7 track EP was released in November 2016 and gained immediate traction. Triple J described the EP as “seven joyous sky-punching tracks that combined 60s garage punk and 70s new wave punk".

The trio cited the Sex Pistols, Ramones, and Black Flag as early influences, and the classically scrappy D.I.Y. sound of punk could be heard across this self-titled debut EP.

This EP is a 2020 reissue on limited red with black splatter coloured vinyl, pressed in Australia via Bargain Bin Records. 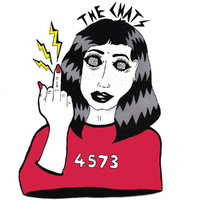