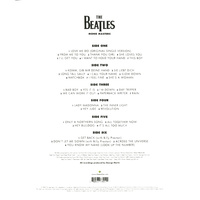 Mono Masters is a compilation album by British rock band The Beatles, released in September 2009 via Parlophone Records.

The compilation is an alternate all mono version of the album Past Masters, and was originally released as a part of The Beatles In Mono box set.

The Mono Masters doesn't follow Past Masters' track listing exactly, primarily because the singles released after 1966 didn't necessarily have mono mixes: there are no mono mixes for "Get Back" or "Let It Be", but there are mono versions of the new songs from the 1968 Yellow Submarine soundtrack, and they're all here. Perhaps this, along with the inclusion of the German singles of "Komm Gib Mir Deine Hand" and "Sie Liebt Dich", gives Mono Masters a slightly off-kilter feel, but it's a subtle one that's easy to ignore because the compilation overspills with great 45s, almost all of which sound better in their tight, punchy mono mixes. This means Mono Masters is not only a useful collection, it's an entertaining one as well.

This remastered triple 3LP set pressed in Europe was reissued in 2014 as part of The Beatles in Mono Vinyl series, with Remastered Audio on 180 Gram Heavyweight Vinyl and reproduced artwork in a tri-fold sleeve.