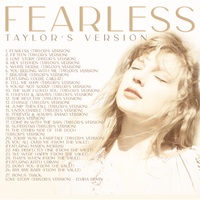 “Fearless was an album full of magic and curiosity, the bliss and devastation of youth. It was the diary of the adventures and explorations of a teenage girl who was learning tiny lessons with every new crack in the facade of the fairytale ending she’d been shown in the movies. I’m thrilled to tell you that my new version of Fearless is done and will be with you soon. It’s called Fearless (Taylor’s Version) and it includes 26 songs.” – Taylor Swift.

Fearless Taylor’s Version is the first of six studio albums that Taylor Swift plans to re-record following a dispute with her original label Big Machine Records over the ownership of the masters to the original recordings of her first six studio albums.

This album comprises re-recorded versions of all original 19 songs from the Platinum Edition of Fearless and the 2010 soundtrack single “Today Was A Fairytale” and six additional tracks from the vault (songs that were not included on the original album).

Recreating the instrumentation of the 2008 recording, the album was produced by Taylor Swift, Christopher Rowe, Jack Antonoff, and Aaron Dessner.

This triple album 3LP record set is a limited edition on gold coloured vinyl housed in a tri-fold three panel gatefold sleeve, pressed in the US via Republic Records.