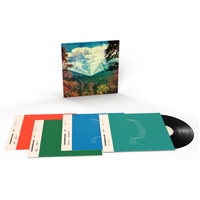 Innerspeaker is the debut studio album by Australian progressive rock band Tame Impala, originally released in May 2010 via Modular Recordings and Fiction Records.

Innerspeaker, which was certified gold in Australia was well received by critics, and with good cause. Although it lacks a stand out single, Innerspeaker demonstrates a subtle yet encompassing sense of control, each track part of a whole unit.

The vocal reverb sound is reminiscent of John Lennon and the drums drive the songs without being overly prominent, but noticeable for the clever use of cymbals giving the album a 1970s psych and prog rock vibe. The album flows perfectly making this a very strong debut album.

To celebrate the albums 10th Anniversary, it is being released as a limited edition expanded vinyl set on 4LPs: Innerspeaker (2010 ➝ 2020). The original album is included on the first two discs with some previously unreleased tracks, instrumentals and new versions of songs from the album, and an unearthed side long jam, rounding out this vinyl set.

Check out a couple tracks from the album:  Solitude Is Bliss, Lucidity  and Expectation.

This limited edition 10th Anniversary 4LP box set is on black vinyl in individual picture sleeves with a booklet and bonus material housed in a slipcase, pressed in Germany via Fiction and Island Records.