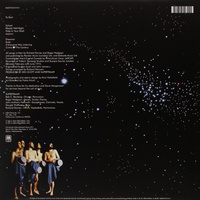 Crime Of The Century is the third studio album by English progressive rock band Supertramp, released in September 1974 by A&M Records.

Crime Of The Century is the album where it all came together for Supertramp, as they composed scores of tracks in order to find the best eight to make this record. Along the way, the group forged a non-traditional and unique sound which falls somewhere along the twisted road between progressive rock and pop music. Produced by Ken Scott, the album is also a sonic masterpiece with incredible dynamics.

While not a concept album, there is much recursion and referencing among the tracks, which consistently alternates primary vocalists all the way through. Lyrically, many of these tracks deal with themes of youth, isolation, loneliness and mental stability.

Crime Of The Century sports one of the era’s most seamlessly effective first sides. The atmospherics that open School with a schoolyard scream leading into the song and the song’s dynamics, especially the slow-burn buildup to the delightful electric piano solo, are nothing short of thrilling.

Bloody Well Right is the earliest among the band’s well-known songs, but proved a bit “progressive” for the singles charts. While the chorus is pretty well a sing-along, the power-chording verses are another thing entirely.

Hide In Your Shell combines all of the sonic elements that make the band special, the melancholy yet uplifting lyric is a thing of beauty. And a good portion of its run time consists of hypnotically repeated musical motifs.

Side One ends with Asylum, a lament that’s melancholy, but that also possesses the widescreen grandeur.

Side Two carries forth the aesthetic established in the album’s first half. Dreamer, the first single, kicks things off with its memorable and insistent Wurlitzer electric piano.

The contemplative ambience continues with If Everyone Was Listening, another piano-led number which unfolds as the song progresses and instruments are added.

The album closes with the title track, Crime Of The Century, a melodramatic number featuring arrangement and production flourishes some brilliant twin lead guitar work and the track’s soaring string arrangement the cherry on top.

With the critical and commercial success of Crime Of The Century, Supertramp stabilized their lineup of Davies-Hodgson-Helliwell-Thomson-Siebenberg for the next decade and four subsequent studio albums. Over that period, the group would grow in stature and popularity while increasingly drifting away from the musical formula which made this 1974 album a masterpiece.

This 40th Anniversary remastered edition LP on 180 gram heavyweight vinyl includes a printed inner sleeve and digital download and is pressed in Europe.