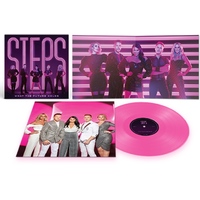 Steps - What The Future Holds

What The Future Holds is the sixth studio album by British pop group Steps, released in November 2020 via BMG.

Steps are the UK's most successful mixed sex pop group of all time, with 14 top five singles, 3 number one albums, 20 million record sales and 7 sold-out national arena tours under their belts.

Hits include: #1 singles 'Tragedy/Heartbeat' and 'Stomp', the gold certified 'One For Sorrow' and 'Better Best Forgotten', the silver certified '5,6,7,8', 'Last Thing On My Mind', 'Love's Got A Hold Of My Heart', 'Chain Reaction' and more.

Three years after they staged one of the most successful comebacks of the decade, the enduring British pop legends return once again with their sixth studio album, What the Future Holds.

Alongside Sia, the versatile album also sees them reunite with the likes of Fiona Bevan (Ed Sheeran), Ina Wroldsen (Shakira) and Karl Twigg, who worked on their first three albums. The band also experiment with the likes of Hannah Robinson (Kylie) and new pop shape-shifters such as MNEK and Gracey.

"We will never forget the past with Steps, it's what made us," says Claire, "but we've got to look to the future too."

This album is an indie stores limited edition on transparent pink coloured vinyl housed in a gatefold sleeve with printed inner sleeve, pressed in Europe via BMG.