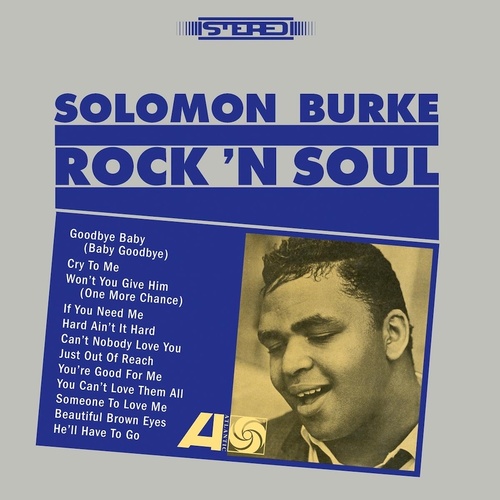 He had a string of hits including "Cry to Me", "If You Need Me", "Got to Get You Off My Mind", "Down in the Valley" and "Everybody Needs Somebody to Love". Burke was referred to as "King Solomon", the "King of Rock 'n' Soul", "Bishop of Soul" and the "Muhammad Ali of soul".

The album Rock 'n Soul was originally released in 1964 by Grammy Award winning Solomon Burke. The album contained seven US Top 100 Billboard hits, including "Just Out of Reach (Of My Two Open Arms)", "Cry to Me", "Can't Nobody Love You", "If You Need Me", "You're Good For Me", "Goodbye Baby (Baby Goodbye)", and "He'll Have to Go". In addition, "If You Need Me" went as high as #2 in the Black Singles Chart.

The album's title refers to Burke's rank as the "King of Rock 'n' Soul", a label Burke embraced because of the interconnectedness of the musical forms of rock and roll and soul music, telling Jet in 1963 that "without soul, there'd be no rock, and without rock, there'd be no soul."

This extraordinary album is not only soulful but a confirmation that Burke is a genius when it comes to writing music and making it happen in a studio!

The album was included in Robert Dimery's 1001 Albums You Must Hear Before You Die.