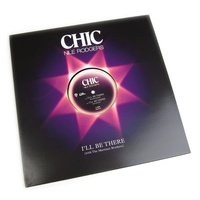 Chic Featuring Nile Rodgers - I'll Be There (With The Martinez Brothers)

I'll Be There is a song by the American disco, funk and soul band CHIC featuring Nile Rodgers, released in March 2015 via Warner Bros. Records.

It was produced by Rodgers and Bernard Edwards. It is the lead single for the band's upcoming album It's About Time scheduled for a 2016 release.

Since Nile Rodgers is the act's founder and only original member, he received billing credit on the song.

The single pays tribute to the disco era and makes references to Chic-related songs and artists produced by the group. Among the referenced tracks (and acts) mentioned and sampled:

I'll Be There reached number one on Billboard's Hot Dance Club Songs chart in June 2015, and was the act's fourth number one overall, and their first number-one single in nearly 23 years when Chic Mystique peaked at number one, in 1992.

This 12" Single is on 180 Gram Vinyl at 45 RPM housed in a die-cut printed sleeve, pressed in Europe.