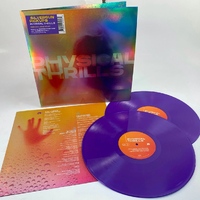 Physical Thrills is the follow-up to the 2019 album Widow’s Weeds, and is produced by Butch Vig (Nirvana, Garbage, Smashing Pumpkins, Green Day, Foo Fighters) and mixed by Billy Bush.

Physical Thrills spans through an eclectic mix of distorted synths, pop-tinged danceable tunes, pared-down ballads, and a collection of “dream shanties” melodies that are all interconnected with each other into a cohesive body of work.

This double album 2LP record set is an indies record stores limited edition on violet coloured vinyl housed in a mirror board gatefold sleeve with printed booklet, pressed in the US via New Machine Recordings.