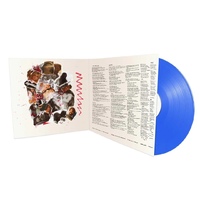 Share:
$45.90
In Stock
All copies of the album have a small crease in the top corner of the album cover - see photo attached

Been Doin It For A Bit is the debut studio album by Australian indie rock musician Ruby Fields, released in September 2021 via Space 44 and Flightless Records.

Singer-songwriter Ruby Fields has announced her long- awaited debut studio album Been Doin It for a Bit will arrive via Space 44 and Flightless Records.

Fields and her band recorded Been Doin It For A Bit between Revolver Studios in Waiuku, New Zealand and Music Farm Studios in Byron Bay, with production handled by long-time collaborator Chris Collins.

The album has reached #1 on the Australian ARIA albums charts.

This album is a limited edition on opaque “super blue” coloured vinyl housed in a gatefold sleeve with a poly lined plain inner sleeve and biodegradable cardboard outer sleeve, pressed in Australia via Space 44 and Flightless.