"Out Of The Black", the bludgeoning opener to Royal Blood's self-titled debut, is a riff-fueled onslaught that belies their two-piece status; with just a heavily processed bass guitar and a drum set between them, they make some four-piece rock bands look inconsequential.

Royal Blood's bustling career started just 24 hours after drummer Ben Thatcher picked up vocalist/bassist Mike Kerr after he touched down from a trip to Australia with a show in their hometown in Brighton, and they didn't look back. In roughly a year together Royal Blood  learned quickly, and tour dates and the early support of Arctic Monkeys influenced tracks such as "Blood Hands", which has all the cocksure swagger of the Sheffield outfit.

Combining crushing drums and Kerr's hybrid bass setup - which is ingeniously split through both a bass amp and a guitar amp, with pitch-shifters, modulation, and heavy distortion bolstering the rugged sound - the duo draws immediate comparisons to luminaries the White Stripes, with "Loose Change" bearing significant familiarity, while there are nods at various times to Muse and Two Gallants as Royal Blood pummel their way through "Figure It Out". When Kerr and Thatcher aren't pounding their instruments hard, the limitations to their sparse setup is evident, with "You Can Be So Cruel" and "Ten Tonne Skeleton" suffering slightly to fill the dynamics, but at the same time they’re bolstered by rolling guitar riffs and Kerr's voice is stretched to its limits.

It's not all guitars and drums, and singles "Little Monster" and "Come On Over" illustrate their aptitude for well-crafted structures and melodies, and the moody delivery of Kerr's wholehearted vocals is prominent in the radio-friendly mix.

The whirlwind year that took the duo from obscurity to 2013's Glastonbury Festival is akin to the full-throttle rock music Royal Blood create, and there is little time for respite during their breezy debut album that bridges the gap between heavy-hitting rock and digestible pop/rock.

This album is a 2020 repress on black vinyl with a printed inner sleeve, pressed in Europe via Black Mammoth and Warner Records. 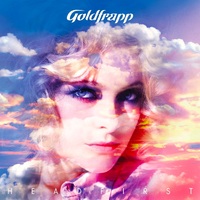