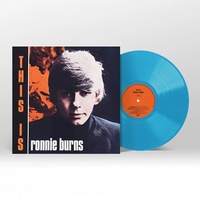 This Is Ronnie Burns is a compilation album by Australian pop singer Ronnie Burns, released in November 2019 via Warner Music Australia.

Ronnie Burns AM is an Australian rock singer-songwriter and musician. He fronted the Melbourne band "The Flies" in the early 1960s, followed by a solo career into the 1970s and was a member of Burns Cotton & Morris in the 1990s. He retired from performing in 2000. His solo hit single, "Smiley" peaked at number two on the Go-Set National Top 40 in 1970. On 10 June 2013 Burns was awarded a Member of the Order of Australia with the citation "For significant service to the community, particularly to children recovering from illness and trauma, and to the entertainment industry".

The best of Ronnie's solo singles and three albums for Spin Records, from beat-pop to social statement, are collected here on This Is Ronnie Burns. Including more songs from the Gibbs, plus hit writers Terry Britten and Johnny Young.

Mastered from the original tapes held in the Warner archive and with sleeve notes by rock journalist Jeff Jenkins.

This album is a limited edition reissue on blue coloured vinyl with a printed inner sleeve, pressed in Australia via Warner Music Australia.