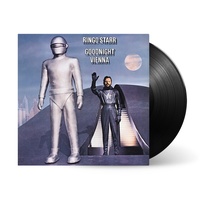 Goodnight Vienna followed the huge success of his third album Ringo (1973), and was recorded in August 1974 and produced once again by Richard Perry.

John Lennon was the only ex-Beatle to contribute to this album as Paul McCartney was busy with Wings promoting the Band On The Run album and George Harrison was busy recording his Dark Horse album.

John Lennon contributed the title track “Goodnight Vienna” to the album and played piano on the track. Lennon also suggested Starr should cover The Platters hit song “Only You (And You Alone)”, on which Lennon played piano.

Elton John and Taupin contributed a song for the album “Snookeroo”, on which John played piano. Harry Nilsson gave the song “Easy For Me” to Starr to record on the album.

A couple of songs were originals written by Starr and Vini Poncia, and Starr chose to cover a folk song the “No No Song” written by Hoyt Axton, which was released as a single, reaching #3 on the US Singles charts.

The album reached #8 on the US Billboard 200, #30 on the UK and #11 on the Australian Albums charts, not reaching the same level of commercial success as its predecessor Ringo.

This is another strong solo album from Ringo, with a good selection of songs and first class production and playing with his “all starr” friends and musicians.

This LP record is a 2018 reissue on black vinyl with a printed inner sleeve, pressed in Europe via Apple Records and Capitol Records.