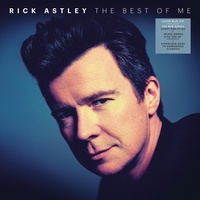 The Best Of Me is a compilation album by English singer and songwriter Rick Astley, released in October 2019 via BMG.

Rick Astley is the soulful English pop star with the bouffant hair who sang “Never Gonna Give You Up” in the 1980s. Astley never went away and made a comeback in 2007, becoming an Internet phenomenon when the music video for "Never Gonna Give You Up" became integral to the meme known as "rickrolling". Astley was voted "Best Act Ever" by Internet users at the MTV Europe Music Awards 2008, and his 2016 album 50 debuted in the UK at #1.

The album contains a new single released in September 2019 “Every One Of Us” and a slowed down version of “Never Gonna Give You Up” accompanied by pianoforte.

The vinyl edition contains two discs of old recordings and a digital download code for new recordings of old songs “reimagined”, with new arrangements and interpretations.

This is a limited edition double album on clear blue vinyl with printed inner sleeves and download code for ten reimagined classics, pressed in Europe via BMG.