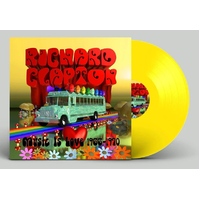 Music Is Love 1966-1970 is the sixteenth studio album by Australian singer songwriter Richard Clapton, released in April 2021 via Bloodlines.

The legendary Richard Clapton returns to his roots for a collection of classic hippie anthems from the late 1960s and 1970, on his new album Music Is Love 1966 – 1970. It is Richard Clapton’s first covers album in a career that has spanned almost 50 years.

The album started out as a deeply personal collection, a way for Clapton to reconnect with his musical beginnings. “These songs are where I came from,” he says, highlighting his love for Bob Dylan, The Byrds, David Crosby, Neil Young and Buffalo Springfield”.

During the summer of love, Clapton was living in London and Berlin. He owned only two cassettes – Neil Young’s After The Gold Rush and David Crosby’s If I Could Only Remember My Name. “I look back at that whole period of my youth and those years 1966 to 1970 and I think, “wow, talk about being born precisely at the right time.”

The songs on Music Is Love (1966 – 1970) are songs that defined an era, including Buffalo Springfield’s “For What It's Worth (Hey, What's That Sound)”, Joni Mitchell’s “Woodstock”, Neil Young’s “Southern Man”, The Byrds’ “Eight Miles High”, Crosby, Stills, Nash & Young’s “Almost Cut My Hair”, and The Youngblood’s “Get Together”.

The first single released from the album was The Lovin’ Spoonful’s “Summer In The City”, written about an unprecedented heatwave in New York.

Richard Clapton approaches each song with energy putting his own stamp on the songs, without losing the essence of how they felt from the original recordings.

A cracking covers album, and one that seems very appropriate for our current times, with the title track “Music Is Love” summing it up perfectly. Music is timeless!

This album is a limited edition on yellow coloured vinyl with a printed inner sleeve, pressed in Australia via Bloodlines.