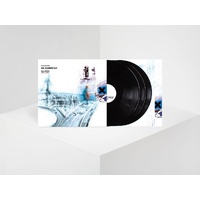 Using the textured soundscapes of ‘The Bends’ as a launching pad, Radiohead delivered another startlingly accomplished set of modern guitar rock with OK Computer. The anthemic guitar heroics present on ‘Pablo Honey’ and even ‘The Bends’ are nowhere to be heard here. Radiohead have stripped away many of the obvious elements of guitar rock, creating music that is subtle and textured yet still has the feeling of rock & roll.

Even at its most adventurous - such as the complex, multi-segmented "Paranoid Android" - the band is tight, melodic, and muscular, and Thom Yorke's voice effortlessly shifts from a sweet falsetto to vicious snarls. It's a thoroughly astonishing demonstration of musical virtuosity and becomes even more impressive with repeated listens, which reveal subtleties like electronica rhythms, eerie keyboards, odd time signatures, and complex syncopations.

All of this would simply be showmanship if the songs weren't strong in themselves, and OK Computer is filled with moody masterpieces, from the shimmering "Subterranean Homesick Alien" and the sighing "Karma Police" to the gothic crawl of "Exit Music (For A Film)". The dense instrumental textures never seem over-stuffed and are wide-ranging and often thrilling, driven by Phil Selway¹s meaty drumming, layered with growling guitars and the varied use of keyboards, synthesisers and electronic treatments.

The album received widespread critical acclaim and in subsequent years has been cited by listeners, critics and musicians as one of the greatest albums of all time.

OK Computer is the album that established Radiohead as one of the most inventive and rewarding guitar rock bands of the '90s.

This double album 2LP record set is a 2020 reissue on black vinyl housed in a gatefold sleeve with printed inner sleeves, pressed in Europe via XL Recordings.