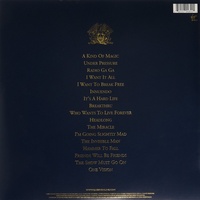 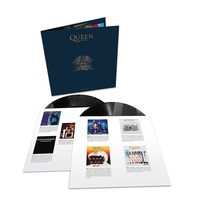 Arriving a decade after the first compilation and a decade after the group started its slow shift from international superstars toward ruling the world. Greatest Hits II charts the second half of their career well and sold a not unenviable 16 million copies.

Apart from “Under Pressure” and “Radio Ga Ga”, the singles here did not crack the American Top 40, but they’re well-known throughout the world, particularly the operatic anthems like “I Want It All” and “Who Wants To Live Forever”.

Even though the melancholia present in their later singles (“The Show Must Go On”, “Innuendo”) isn’t something a fan always wants to dwell on, this is also where to find some of their finest moments (“Hammer To Fall”, “I Want To Break Free”, “Under Pressure”).

This vinyl album has been half speed mastered at Abbey Road Studios.