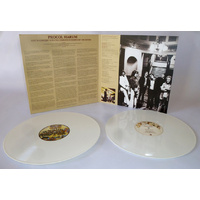 Procol Harum formed in 1967 and are best known for the their hit single A Whiter Shade of Pale, which is considered a classic of popular music and is one of the few singles to have sold over 10 million copies. Although noted for its baroque and classical influence, Procol Harum's music also embraces the blues, R&B, and soul.

The band has seen many line-up changes since its formation with the constant membership helmed by lead singer and piano player Gary Brooker and his songwriting partner, lyricist Keith Reid.

The members of Procol Harum that recorded this live album were:

In Concert With The Edmonton Symphony Orchestra is an extraordinary Procol Harum record.

Being one of the very few times the band ever played with a choir and orchestra, the 3000-strong audience were witness to a unique spectacle which thankfully is preserved by this high quality recording. 52 musicians, 24 singers and a regiment of sound, lightning, stage and special effects specialists ensured the impact of the show was felt both in and outside the concert building, the Northern Alberta Jubilee Auditorium of Edmonton, Canada. The concert was recorded on 18 November 1971.

The album was very successful on the US Billboard Top 200, peaking at #5. It is the band's best selling album, certified Gold by the RIAA.

Conquistador was released as a single from the album and became a huge hit for the band, reaching #7 on the Canadian singles charts, #22 on the UK singles charts and #16 on the US single charts.

This is one of "The Captain's" favourite Procol Harum albums, and Conquistador brings back many memories of hearing this on the Melbourne radio station 3XY.

Check out a couple of tracks from the album:  Conquistador, A Salty Dog and Whaling Stories.

This Double Album 2LP Record set is on White Vinyl housed in a Gatefold Sleeve with 3 Bonus Tracks, Reissued in August 2016 via Let Them Eat Vinyl, pressed in Europe.