The Weather is the seventh studio album by Australian psychedelic-rock band Pond, released in May 2017 via EMI Records in Australia and Marathon Artists in the UK.

Following the success of Tame Impala's 2010 debut album Innerspeaker, the band recorded another album, Beard, Wives, Denim, adding Jamie Terry, and Tame Impala frontman Kevin Parker to the band's lineup, and releasing the album in 2012 following the band's North American tour, and appearance at South by Southwest. The same year Pond were named "The Hottest New Band In The World" by NME in their "Hot List" issue.

Their new album The Weather is the follow-up to Man It Feels Like Space Again (2015), and is the bands commentary on current geo-political events from the viewpoint of one of the remotest major cities in the world, Perth.

Pond frontman Nicholas Allbrook has described the album as a "concept album, not completely about Perth, but focusing on all the weird contradictory things that make up a lot of colonial cities around the world. Laying out all the dark things underneath the shimmering exterior of cranes, development, money and white privilege. It’s not our place, but it is our place. British, but Australian, but not REAL Australian. On the edge of the world with a hell of a lot of fucked things defining our little city, still we try and live a wholesome respectful life, while being inherently disrespectful. At the end of all this confusion in our weird little white antipodean world, there’s the beach, purity and nature that brings us all together".

The album has a similar feel to Tame Impala’s Currents and moves along with progressive rock eccentricities, producing an imaginative set of songs. The set of songs include some of their most melodic songs to date, including “Sweep Me Off My Feet”, “Paint Me Silver” and “Colder Than Ice”. The opener “30,000 Megatons” is a bombastic welcome to the album and “The Weather” closes with a Pet Shop Boys sounding synth-pop song to add to the mix.

The album has received critical acclaim and Metacritic has assigned a weighted average score of 81 out of 100, indicating “universal acclaim”. Gwilym Mumford in the Guardian writes: "…Accessible but still absolutely out there, this is prog, but not as we know it.”  Saby Reyes-Kulkarni of Pitchfork writes: "…For all its disjointedness, the album never wanders more than a few inches away from the sublime. It’s a document of a band knocking loudly on the door of greatness."

The album peaked at #33 on the Australian ARIA Albums chart.

This LP record is a limited edition on blue and white splatter vinyl housed in a gatefold sleeve with a digital download code, pressed in Australia. 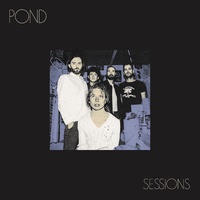