Pink Martini - Splendor In The Grass

Splendor In The Grass is the fourth studio album by the American musical group Pink Martini, released in October 2009 via Heinz Records.

Pink Martini is a musical group that was formed in 1994 by pianist Thomas Lauderdale in Portland, Oregon, USA. Describing itself as a "little orchestra," its music crosses genres such as classical, Latin, jazz and classic pop.

This album is a personal favourite of "The Captain" - a really great album to play in the evening to chill out to, after a long hard day at work.

Here is an extract from the Pink Martini official website describing the album:

"Pink Martini’s fourth studio album – Splendor In The Grass – encapsulates the band’s history and spirit of global collaboration and inclusivity. Comprised of nine original songs and four covers (with songs in English, Neapolitan, Italian, French and Spanish), Splendor In The Grass was recorded in the band’s hometown of Portland, Oregon and produced by bandleader/pianist Thomas Lauderdale and longtime collaborator and muse Alex Marashian—a college cohort of Lauderdale and vocalist China Forbes.

The album opens with the band’s first ever song in Neopolitan – “Ninna nanna” is a stunning lullaby sung for a sleeping sailor who “dreams in the blue” and was written for the band by longtime friends Alba Clemente (actress of Italian stage and wife of the Italian painter Francesco Clemente who co-authored the band’s hit “Una Notte a Napoli”) and New York art dealer Massimo Audiello.

From guitarist Dan Faehnle’s jazzy instrumental “Ohayoo Ohio (Hello Ohio),” to the charming chamber pop song “Sunday Table” “this album is all about participating in the world … being part of it, being out in the street and finding moments of incredible breathtaking splendor in the activities and unfoldings of every day,” says Lauderdale.

Drawing inspiration from William Wordsworth, Walt Whitman and the Carpenters, the title track, “Splendor In The Grass” was written by Marashian and Lauderdale, and is a plea for a return to the land in classic 70’s pop style and features Courtney Taylor-Taylor of the Dandy Warhols on electric guitar and the opening theme of Tchaikovsky’s Piano Concerto #1.

“Oú est ma tête” is a witty and wistful cha cha in French about losing body parts … in parts of Paris. “Since I lost you, I am in pieces on the avenue,” sings Forbes. “And I cannot pick up the pieces by myself … Come back, darling, to me … It’s you who makes me whole.”

Companion pieces, “And Then You’re Gone” and “But Now I’m Back” are based on the opening themes of Franz Schubert’s Fantasy in F-minor for piano and 4 hands. “And Then You’re Gone” tells the tale of a woman who has reached the end of her rope and tells the philandering Lorenzo to get lost. “But Now I’m Back” marks the recording debut of NPR Justice Correspondent Ari Shapiro and is Lorenzo’s plea to Maria to let him back in.

Inspired by the view from Forbes’ home, the stunning Forbes/Lauderdale penned “Over The Valley” sets a new standard in classic love songs, while “Tuca tuca” – first sung by the Italian chanteuse Rafaella Carra – is a flirtatious song, with the mantra, “Mi piaci” or “I like you”. Often accompanied by a little dance in which two people “touch” … this Tuca Tuca features China Forbes’ brilliant and seductive singing in Italian and bassist Phil Baker playing the sitar from the 1968 Peter Sellars’ film The Party.

Written for his daughters Sadie and Lulu in Berlin, “Bitty Boppy Betty” is an Alex Marashian original, complete with barbershop quartet, cool percussion and horn sections, and a melody which swings both ways.

Originally written by Joe Raposo in 1971 for the American children’s television show Sesame Street and made famous when the Carpenters recorded it a year later, “Sing” sees the band return the song to its roots and features a bilingual duet between China Forbes and Emilio Delgado, aka “Luis” from Sesame Street with a background chorus comprised of the Royal Blues of Grant High School and the staff of Portland Mayor Sam Adams.

The legendary ranchera singer Chavela Vargas recorded a gorgeously striking version of Agustin and Maria Teresa Lara’s “Piensa en mi”. A one-time lover of the Mexican painter Frida Kahlo and admired by Pedro Almodovar, she dressed as a man in her youth, smoked cigars, drank heavily, carried a gun and was known for her characteristic red poncho, which she still dons in performances.

Perhaps the most beautiful ode to the city of New York ever written, “New Amsterdam” was composed by Louis Hardin, aka Moondog, the Viking of Sixth Avenue. Here the Pink Martini brass section is joined by multiple saxophones, euphoniums, tubas, trombones and trumpets with China Forbes and the incredible Tsunami Singers of the Pacific Youth Choir … following the driving beat of the concert bass drum.

Splendor In The Grass comes to a gorgeous close with an intimate reprise of “Ninna nanna” with Dan Faehnle on guitar accompanying China Forbes."

This double album 2LP record set is on 180 gram high quality vinyl housed in a gatefold sleeve, with a digital download code, pressed in the US. 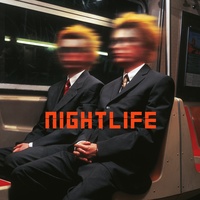