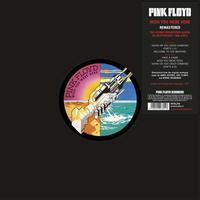 Wish You Were Here is the ninth studio album by the British progressive rock group Pink Floyd, originally released in September 1975 via EMI Records in the UK and Columbia Records in the US.

Inspired by material the group composed while performing across Europe, Wish You Were Here was recorded in numerous sessions at London's Abbey Road Studios.

Some of the songs critique the music business, others express alienation, and "Shine On You Crazy Diamond" is a tribute to Syd Barrett, whose mental breakdown had forced him to leave the group seven years earlier. It was lead writer Roger Waters' idea to split "Shine On You Crazy Diamond" into two parts and use it to bookend the album around three new compositions, introducing a new concept as the group had done with their previous album, The Dark Side of the Moon.

As with The Dark Side of the Moon, the band used studio effects and synthesizers, and brought in guest singers to supply vocals on some tracks of the album. These singers were Roy Harper, who provided the lead vocals on "Have a Cigar", and The Blackberries, who added backing vocals to "Shine On You Crazy Diamond".

The album became an instant commercial success and record company EMI was unable to print enough copies to satisfy demand. Although it initially received mixed reviews, the album has since been acclaimed by critics and appears on Rolling Stone's list of "The 500 Greatest Albums of All Time".

Band members Richard Wright and David Gilmour have each cited Wish You Were Here as their favourite Pink Floyd album.

Listen to a couple of tracks from the album:  Wish You Were Here and Have a Cigar.

This LP is a part of the 2016 remaster series released on 180 Gram Vinyl in a resealable stickered black plastic bag, with the original artwork replicated including printed cardboard inner sleeve with lyrics, pictures, and credits.  This LP was pressed in Europe.