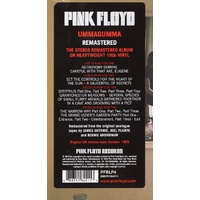 Ummagumma is the fourth studio album by the British progressive rock band Pink Floyd, originally released in October 1969 via Harvest Records in the UK.

Ummagumma is a double album and was released on 25 October 1969 by Harvest Records in the UK and by Capitol Records internationally. The first LP is a live album that contains part of their normal set list of the time recorded in April and May 1969, while the second contains solo compositions by each member of the band recorded as their fourth studio album.

The studio album came as a result of Richard Wright wanting to make "real music", where each of the four group members (in order: Wright, Roger Waters, David Gilmour and Nick Mason) had half an LP side each to create a solo work without involvement from the others.

Wright's contribution, Sysyphus, was named after a character in Greek mythology, usually spelled "Sisyphus", and contained a combination of various keyboards, including piano and mellotron. Although initially enthusiastic about making a solo contribution, Wright later described it as "pretentious".

Waters' Several Species of Small Furry Animals Gathered Together in a Cave and Grooving with a Pict contained a variety of vocal and percussion effects treated at various speeds, both forwards and backwards, and was influenced by Ron Geesin, who would later collaborate with both Waters and Pink Floyd. Waters' other contribution Grantchester Meadows was a more pastoral acoustic offering and was usually played as an opening to concerts over 1969.

Gilmour has since stated he was apprehensive about creating a solo work, and admits he "went into a studio and started waffling about, tacking bits and pieces together", although part one of The Narrow Way had already been performed as Baby Blue Shuffle in D Major in a BBC radio session in December 1968. Gilmour said he "just bullshitted" through the piece.

Mason's The Grand Vizier's Garden Party featured his then wife, Lindy, playing flute, and Mason playing a seven-minute drum solo, which was actually used as part two of his three-part piece.

The artwork was designed by regular Floyd collaborators Hipgnosis and features a number of pictures of the band combined to give a Droste effect.

Although the album was well received at the time of release, it has since been looked upon unfavourably by the band, who have expressed negative opinions about it in interviews.

Ummagumma reached number 5 on the UK albums chart and number 74 in the US, marking the first time the band reached the top 100 there. The album was certified gold in the US in February 1974 and platinum in March 1994.

Check out a couple of tracks from the album:  Astronomy Domine, Set The Controls For The Heart Of The Sun, Sysyphus Part I, Grantchester Meadows, The Narrow Way Part I and The Grand Vizier's Garden Party Part I.

This Double Album 2LP Record set is the 2016 Stereo Remastered Album on 180 Gram Heavyweight Vinyl housed in a Gatefold Sleeve, pressed in the U.S.