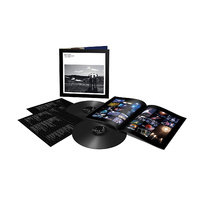 Highlights include a new remixed version of “One Slip”, “Sorrow” and “On The Turning Away” from A Momentary Lapse of Reason (1987), which includes restored keyboard contributions by the late Richard Wright and new drum parts by Nick Mason.

There are three live recordings from Knebworth in 1990, “Shine on You Crazy Diamond”, “Comfortably Numb” and “Wish You Were Here”.

A song from The Division Bell sessions “Marooned Jam” is included, which provides fan with a sense of how this beautiful instrumental piece evolved to the final version for the last studio album released in 1994 before Richard Wright’s passing in 2008.

This vinyl set gives the listener a nice cross section of the band’s work both in the studio and live in concert from 1987.

This double album 2LP record set is on 180 gram heavyweight vinyl housed in a gatefold sleeve with printed inner sleeves and 24 page printed booklet, pressed in the US via Pink Floyd and Columbia Records. Soundtrack - Music From The Star Wars Saga - The E