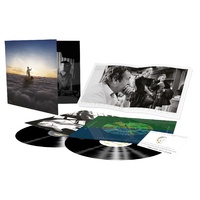 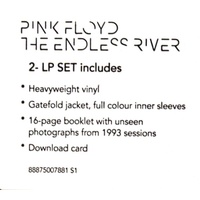 The Endless River is the fifteenth and final studio album by the British progressive rock band Pink Floyd, released in November 2014 via Parlophone Records in the UK and Columbia Records in the US.

It is Pink Floyd's only studio album since the death of keyboardist and founding member Richard Wright, who appears posthumously, and the third led by guitarist and singer David Gilmour following Roger Waters' departure in 1985. It is also the first Pink Floyd album distributed by Parlophone and Warner Bros. Records following the purchase of Parolophone Recprds from EMI.

The Endless River consists almost entirely of instrumental and ambient music, and is based on hours of previously unreleased material Pink Floyd wrote, recorded and produced with Wright during sessions for its predecessor, The Division Bell (1994).

The Divison Bell was the first studio album recorded by Pink Floyd since Wish You Were Here that featured song writing credits from Richard Wright. At the time of the album's release in 1994, Wright had commented that the album had been the most collaborative effort by the band since Wish You Were Here. A number of the songs on The Division Bell had a similar sonic feeling to those on Wish You Were Here, especially with the interplay between Gilmour's Guitar and Wright's Piano / Keyboards.

As the band begain work on developing The Division Bell, the three members "jammed" together as they had done in the early Pink Floyd days working with musical themes and chord progressions that evolved into a number of the tracks for Division Bell. A number of these pieces had been unsuitable for that album and were to be considered for an ambient album release of instrumental pieces, however the project was shelved at that time.

After Wright's death in 2008, Gilmour and Mason revisited some of those recordings and decided that there was enough material that had been recorded to work on condensing into a single album release. This became the foundation for The Endless River. The album was also in effect a tribute to Richard Wright, whose keyboard and sonic soundscapes had been overlooked on how important they were to the core sound and success of Pink Floyd.

New material was recorded in 2013 through 2014 aboard Gilmour's houseboat, Astoria, and Medina Studios in Hove, England. It was produced by Gilmour, Youth, Andy Jackson and Phil Manzanera.

The cover concept is by Ahmed Emad Eldin, with sleeve design and final artwork by Stylorouge and creative direction by Aubrey Powell.

The Endless River was promoted with a single, Louder Than Words, and artwork installations in cities including London, New York, Paris, Berlin and Milan.

It became the most pre-ordered album of all time on Amazon UK, and debuted at number one in several countries. The vinyl edition was the fastest-selling UK vinyl release of 2014 and the fastest-selling Pink Floyd album since 1997. The album received mixed reviews.

This album is a Captain Stomp favourite and a wonderful companion piece to The Division Bell. It is the sort of album that one can listen to at the end of a long day, with a nice cup of cocoa, curled up on the sofa and let the music wash over you.

Check out a Trailer by Pink Floyd about the album and three official audio trailers - one, two and three.

This is a Double Album 2LP Record set on 180 Gram Heavyweight Vinyl housed in a Gatefold Sleeve with Full Colour Inner Sleeves and a 16 Page Booklet and a Digital Download Card, pressed in the US.