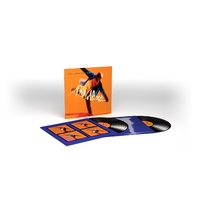 Dance Into the Light is the sixth solo studio album by British drummer, musician, singer-songwriter Phil Collins, released in October 1996 via Atlantic Records.

After the release of his prior solo album, Both Sides, Phil Collins returned with his most upbeat album since 1985's No Jacket Required.

With the exception of "Just Another Story", the album contained numerous up-tempo tracks including the Beatles-inspired "It's in Your Eyes", "Wear My Hat", the Bob Dylan cover "The Times They Are a-Changin'" and the album's title track "Dance Into the Light".

In the liner notes Collins states that he does not use a drum machine at all on this album; this was rumoured to be in response to many of his fans complaints that Both Sides was mostly backed by a drum machine.

The album was produced by Phil Collins and Hugh Padgham.  Musicians who contributed to the album included Daryl Stuermer (guitars), Nathan East (bass), Ronnie Caryl (guitars), Brad Cole (keyboards), and guest backing vocalists, including Arnold McCuller, and Amy Keys.  This album also marked the studio debut of the Vine Street Horns, who had replaced the Phenix Horns on the Both Sides of the World Tour.

It was notable for being the first album that Collins released as a full-time solo artist, having left Genesis earlier that year.

The album received lukewarm reviews from the music critics and was only moderately successful commercially, as compared to his earlier solo album releases.

Six singles were released from the album including the title track which reached #45 in the US and Top 10 in the UK.