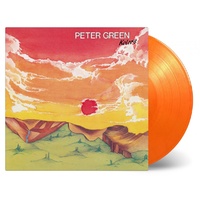 This album comprises material recorded between 1979 and 1982 and not included on the solo albums released during this period.

This period starting in 1979 marked the return of Peter Green to professional music with the assistance of his brother Mike, starting with the release of the 1979 album In the Skies. This was followed by Little Dreamer (1980), Watcha Gonna Do? (1981) and White Sky (1982).

A number of the tracks on this album were composed by Peter’s brother Mike Green, with one cover of a traditional blues song “Same Old Blues”.

You can feel the passion Peter plays with, like his wonderful slide guitar on "Big Bad Feeling". The album closes with the long “Funky Jam”, where all the musicians are going to the max. For those who want to hear how an old blues master sounds today, Kolors is highly recommended.

This LP record is a 2019 limited edition of 1000 individually numbered copies on sun coloured 180 gram audiophile vinyl, pressed in Europe via Music On Vinyl.