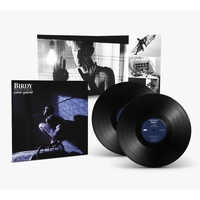 His first full-length score commission, however, came from director Alan Parker for the ’85 film, Birdy, about two disturbed Vietnam vets who develop an avian obsession. Parker, recovering from a gruelling partnership on Pink Floyd’s The Wall, found Gabriel a rather more amenable creative partner. “We got on so well, he’s such a sweet man,” said a relieved Parker of Gabriel. “It was a refreshing change – he doesn’t have any of the hang-ups or the unpleasantness of that particular business.”

Birdy’s music is interesting but fragmentary. While editing, Parker had used a few tracks from Gabriel’s third and fourth solo albums as stock music, and Gabriel develops these themes further. The haunting piano line in “Family Snapshot” (from 1980’s ‘Melt’ album) is reprised on “Close Up”; the similar piano figure in “Wallflower” (from ‘Security’) provides the basis for “Under Lock And Key”; while the introduction from “No Self Control” (also from ‘Melt’), was slowed down and transformed into “Slow Marimbas”. Most spectacularly, the coda from that album’s punky “Not One Of Us” provides the basis for “Birdy’s Flight”, a titanic, drum-heavy instrumental which soundtracks Matthew Modine’s PTSD-induced fantasy of flying like a bird.

Many of the techniques explored on Birdy – particularly the experiments with ambient sound on “Dressing The Wound” and “Sketchpad With Trumpet And Voice” – would lay the groundwork for So, and both projects certainly shared many of the same personnel.

Check out the tracks: “Birdy’s Flight” and “Under Lock And Key”.

This double LP is the 2017 Limited, numbered 45 r.p.m. half speed remastered album housed in a gatefold sleeve with reproduced original artwork and digital download, pressed in Europe on 180-gram heavyweight vinyl.