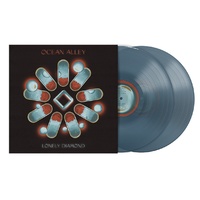 The band released the first single “Stained Glass” from the album in February 2019, and the band said… "'Stained Glass' is the first song we have written since the release of Chiaroscuro and began, as most of our songs do, with a chord and vocal idea for a verse that Baden envisioned. We recorded and mixed the track at the Grove Studios over two sessions with a focus on guitar tone and interwoven guitar parts - as has always been a staple in our production."

A second single “Infinity” was released in June 2019, followed by the third single “Tombstone” released in December 2019. In April 2020 the band premiered their new (and fourth) single “Hot Chicken” on triple j, and announced that the new album Lonely Diamond would be released on 19 June 2020.

The band are one of the most popular acts in Australia right now, having won the coveted #1 in triple j’s Hottest 100 of 2018 for their double platinum single “Confidence” off their previous record which also made it into the Hottest 100 of the Decade, headlined Laneway 2020 alongside The 1975 and they have appeared at all of the biggest festivals in the country including but not limited to Falls Festival, Splendour in the Grass, Bluesfest and Groovin The Moo.

Ocean Alley also received an ARIA nomination for ‘Song of the Year’ with “Confidence”.

This double album 2LP record set is a limited edition of 2,500 copies on transparent blue coloured vinyl at 45 RPM, housed in a gatefold sleeve with a poster, pressed in Australia via Unified Music.