Italian Ice is the fifth studio album by American singer-songwriter Nicole Atkins, released in May 2020 via Single Lock Records.

Nicole Atkins has released five studio albums and her sound is known for its mix of traditional vocal styles and introspective lyrics. She has been compared to Roy Orbison and singers from the Brill Building era.

Recorded at Muscle Shoals Sound studio, Nicole gathered a group of her “best musical friends” – who just so happen to be Jim Sclavunos and David “Moose” Sherman of Nick Cave & The Bad Seeds, The Dap-Kings’ Binky Griptite, and drummer McKenzie Smith (St. Vincent, Midlake) – along with Spooner Oldham and David Hood of the Muscle Shoals Rhythm Section.

This album is a limited edition of 500 copies on translucent ruby red coloured vinyl with a printed insert, pressed in the US via Single Lock Records. 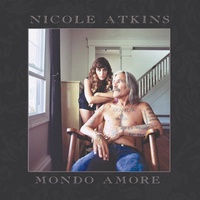