Missy Higgins - The Sound Of White

The Sound Of White is the debut studio album by Australian singer-songwriter Missy Higgins. Originally released in September 2004 via Eleven: A Music Company.

The Sound Of White won the 2005 ARIA Music Award for Best Female Artist. While still in high school, after winning a competition for unsigned artists run by radio station Triple J, Higgins secured a recording contract with Eleven and Warner Bros.

Higgins' first single from the album was "Scar", released in August ahead of the album. Three more singles were released, "Ten Days" in November, "The Special Two" in April 2005 and "The Sound of White" in August. Critics gave the album mixed reviews and it achieved commercial success, reaching number 1 on the ARIA Albums Charts and selling over 630,000 copies. The album was nominated for five ARIA Awards in 2004 and won 'Best Pop Release'. The following year it was nominated for eight ARIA awards and won five. In 2005, Higgins won the Australasian Performing Right Association (APRA) 'Song of the Year' award for "Scar".

This limited LP record is on 180 gram heavyweight white coloured vinyl, reissued in January 2019 via Eleven: A Music Company. 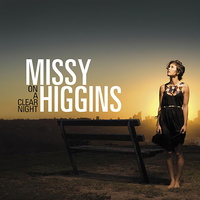 Missy Higgins - On A Clear Night