Despite being founded in Connecticut by Benjamin Goldwasser and Andrew VanWyngarden in 2002, MGMT from the start sounded more Brooklyn than Bedford Avenue. Their productions are hard to describe, but if you mix psychedelic with proto-electro punk, shake it up with art noise and add some indie-pop, you just might have got the picture.

Oracular Spectacular is the first major label studio album by MGMT and ultimately enjoyed both critical approval and commercial success, with the album selling over 500,000 copies in the U.S. and going platinum in Australia, the U.K., and Ireland.

The tunes sound classic and new all at once, paying homage to Bowie, The Kinks, and the Stones, while updating traditional progressions with flashes of Royal Trux, Ween, and LCD Soundsystem.

Oracular Spectacular was named the best album of 2008 by NME and in 2009, Rolling Stone named it the 18th-best album of the decade, and ranked it at #494 on its list of the 500 Greatest Albums of All Time.

This album is a 2014 reissue on 180 gram audiophile vinyl with a printed insert, pressed in Europe via Music On Vinyl. 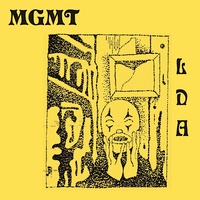