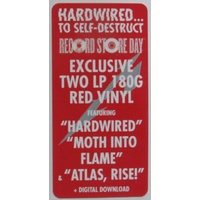 Hardwired... to Self-Destruct is the tenth studio album by American heavy metal band Metallica, released in November 2016 via Blackened Recordings.

Hardwired... to Self-Destruct was produced by Greg Fidelman, who engineered and mixed Death Magnetic.

The album was Metallica's sixth consecutive studio album to debut at number one on the US Billboard 200 and overall, the album topped the charts in 57 countries, including Australia.

"Now that YouTube is the world's biggest television station, we figured we may as well knock a video out for every song... the practicality of shooting twelve music videos is kind of crazy, especially when you're trying to promote your record, and you're all over the place, and trying to make sure it doesn't leak. It's crazy but, at the same time, fun" -Lars Ulrich, 2016

Check out a few tracks from this hard rock album.  Moth into Flame, Hardwired, Summer of Lords,  Atlas, Rise!