The Black Album is the fifth studio album by American metal band Metallica. Originally released in August 1991 via Elektra Records.

Recorded in an eight month span at One on One Recording Studios in Los Angeles. The recording of the album was troubled at times during production, the band frequently came into conflict with their new producer Bob Rock.

The Black Album received widespread critical acclaim and became the band's best-selling album. It debuted at number one in ten countries and spent four consecutive weeks at the top of the Billboard 200, making it Metallica's first album to top the album charts. The Black Album is one of the best-selling albums worldwide, and also one of the best-selling albums in the United States. The album was certified 16× platinum by the Recording Industry Association of America (RIAA) in 2012, and has sold over sixteen million copies in the United States.

This limited double 2LP record is remastered on 180 gram heavyweight black vinyl with a printed insert, reissued in July 2015 via Blackened Recordings. 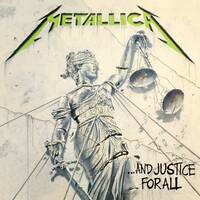 Metallica - …And Justice For All