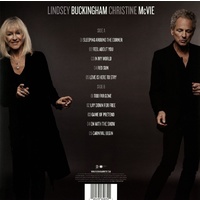 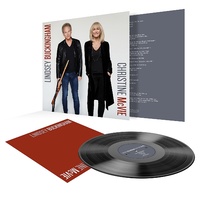 Not long after Christine McVie re-joined Fleetwood Mac in 2014, she and Lindsey Buckingham went to Studio D at the Village Recorder Studios in Los Angeles to rebuild some chemistry. The location was where the band had worked to record their 1979 album Tusk, and the sessions went really well. According to Buckingham "When someone takes such a long hiatus, you don't know if that was a moment in time; if that (working relationship) is still there... But actually, it's better than ever. We were exploring a creative process, and the identity of the project took on a life organically. The body of work felt like it was meant to be a duet album. We acknowledged that to each other on many occasions, and said to ourselves, ‘what took us so long?!’”

Mick Fleetwood and John McVie dropped in to flesh out the rhythm sections on the album and co-producer Mitchell Froom contributed additional keyboards.

Buckingham and McVie released some commentary and footage of some tracks, including "On With the Show" and "Carnival Begin" in a mini behind-the-scenes documentary released in May 2017. The documentary revealed that the sessions had a much more positive and relaxed vibe, which proved to be very therapeutic for McVie: "For me, this is all a fresh beginning. I didn't know myself I'd end up coming back into the band after so long: 16 years...I guess I've rediscovered my love for writing and my love for music. I seemed to have evolved quite organically because I've been sending Lindsey some rough demos; He's refined them and shaped them into some of our best material ever.”

This LP record is on 180 gram vinyl with a printed inner sleeve, pressed in Europe.