Kylie worked with writers and producers such as Cathy Dennis, Rob Davis, Richard Stannard, Julian Gallagher, TommyD, Tom Nichols, Pascal Gabriel and others to create a disco and Europop-influenced dance-pop and nu-disco album. Other musical influences of the album range from synth-pop to club music.

Upon its release, Fever received positive reviews from music critics, many of whom praised its production and commercial appeal. The album was a commercial success, peaking at number one in Australia, Austria, Germany, Ireland, and the UK. In the US, the album peaked at number three on the Billboard 200 chart, becoming Minogue's highest selling album in the country.

Four singles were released from the album. The lead single, "Can't Get You Out of My Head" was released in September 2001 and peaked atop the charts of 40 countries, eventually selling more than six million copies worldwide. The song, which is often recognised as Minogue's signature song, is her highest-selling single and one of the best-selling singles of all time.

Follow-up singles "In Your Eyes" and "Love at First Sight" also performed well on charts internationally. The last single "Come into My World" won the Grammy Award for Best Dance Recording in 2004.

To promote the album, Minogue embarked on her seventh concert tour, the KylieFever2002 tour.

This album is a 20th Anniversary limited edition of 4000 copies on white coloured vinyl housed in a gatefold sleeve with printed inner sleeve and insert, pressed in Europe via Parlophone Records. 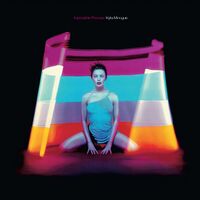