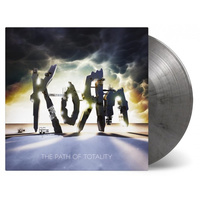 Korn - The Path Of Totality

The Path Of Totality is the tenth studio album by American metal band Korn, originally released in December 2011 via Roadrunner Records.

On The Path of Totality, the band collaborated with some of the leading dubstep and electronic producers in the world, including Skrillex, Excision, Datsik, Noisia, Kill the Noise, and 12th Planet. This resulted in something completely new, yet utterly and definitively Korn.

The album includes the singles "Get Up!", "Narcissistic Cannibal", "Way Too Far" and "Chaos Lives In Everything".

The Path of Totality won Album of the Year at the 2012 Revolver Golden Gods Awards. This was Korn's first victory at the Golden Gods Awards, a ceremony that celebrates the best in hard rock and heavy metal music. Korn was also inducted into the Kerrang! Hall of Fame during the 2011 Kerrang! Awards.

Check out the tracks:  "Get Up!", "Narcissistic Cannibal", "Way Too Far" and "Chaos Lives In Everything".

The album is available on vinyl for the first time!

This limited edition LP record is the first pressing of 2,500 individually numbered copies on 180 gram audiophile silver and black mixed coloured vinyl housed in a gatefold sleeve, pressed in Europe.