Sons of a preacher man and disciples of punk, the Kings Of Leon are Tennessee brothers (and a cousin) who rejected their religious roots in favour of sex, drugs and old-fashioned rock'n'roll. Clinging to their retro influences with a toddler's tenacity, their debut is a lust-propelled journey into emergent adulthood.

Using and abusing passionate gospel, country sweetness and filthy guitar licks, the Kings Of Leon are the kind of authentic, hairy rebels the Rolling Stones longed to be.

The energy and enthusiasm never falter: “California Waiting” is utopian and desperate, while the hedonism of “Joe's Head” is almost claustrophobic. By the time the slightly shambolic singalong of “Dusty” sweeps over you, you'll be smitten.

Youth & Young Manhood may not be sonically adventurous, but some greasy licks sure sound good.

This reissued double LP with remastered audio, bonus track and reproduced artwork is pressed in Europe on 180 gram audiophile vinyl via Music On Vinyl. 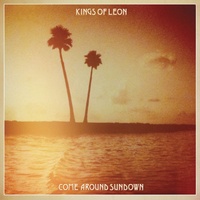