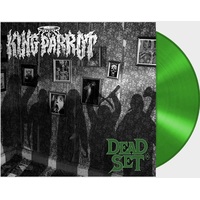 Dead Set is the second studio album by Australian thrash metal band King Parrot, released in May 2015 via EVP Recordings.

Dead Set was produced by the legendary Philip H. Anselmo (Pantera, Down, Superjoint Ritual) and his team of Michael Thompson and Steve Berrigan at Nodferatu's Lair studio in New Orleans.

Having conquered Soundwave Festival in the summer, King Parrot took off to Europe early in March before returning to the USA for South By Southwest and beyond, and will eventually return to Australia for an extensive album release tour hitting venues from Warrnambool to Wollongong. While Australia waits patiently for their return, King Parrot have delivered a delicious gift in the form of 'Like A Rat', another stellar video from the lords of larrikin documenting the band's time spent recording with Anselmo.

Dead Set was released in May 2015 and peaked on the Australian ARIA albums chart at #21. Dead Set was nominated for an ARIA Award for Best Hard Rock or Heavy Metal Album that year but lost to Northlane's Node.

This album is a limited edition on “thrash” green coloured vinyl with a printed insert and download code, pressed in Australia via EVP Recordings.