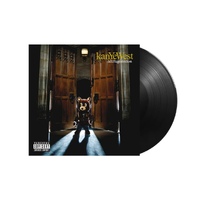 West recorded the album over the course of a year during sessions held at studios in Hollywood and New York City, in collaboration with Jon Brion. The recording sessions also featured guest contributions from Adam Levine, Jamie Foxx, Common, Brandy, Jay-Z, and Nas, among others.

West's production for Late Registration departed from the sped-up soul samples of his debut studio album, The College Dropout (2004), moving towards a more elaborate and orchestral style with a 20-piece ensemble.

Drawing creative inspiration from alternative acts such as Fiona Apple and Portishead, he experimented with musical shifts, string arrangements, and a variety of instruments not usually associated with hip hop, including a celesta, harpsichord, and Chinese bells.

In an effort to write authentic yet relatable lyrics, West engages in storytelling while showcasing his Christian heritage that informed his relationship to the capitalist market economy.

A widespread critical success, Late Registration has often been viewed as a progression from The College Dropout and a pivotal release in hip hop. The album led to West receiving eight nominations at the 48th Annual Grammy Awards, including Album of the Year and Best Rap Album, winning the latter.

Matching The College Dropout's commercial success, Late Registration debuted at #1 on the US Billboard 200 albums chart, while reaching the top 10 in nine other countries, including the United Kingdom.

Five accompanying singles were released, including the hits "Touch the Sky", "Heard 'Em Say", and "Gold Digger", the latter of which topped the Billboard Hot 100.

This double album 2LP record set is a 2021 repress on black vinyl housed in a single pocket sleeve with a printed insert, pressed in the US via Rock-A-Fella Records.