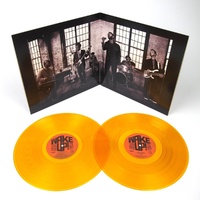 Wake Up! is a collaborative studio album by American R&B singer-songwriter John Legend and American hip hop band The Roots, originally released in September 2010 via G.O.O.D. Music and Columbia Records.

John Legend and The Roots were inspired by the 2008 United States presidential election to record a collaborative album together. In an interview for Billboard, Legend explained the reason for the album's conception at the time, stating:  "I was in the middle of campaigning for Barack Obama and feeling inspired by the atmosphere in the country at the time, so I wanted to do something musically that reflected that moment. The original idea was to do some sort of covers EP, but the more I got into it with the Roots, it felt like something that should be heard and marketed on its own".

The albums title Wake Up! was inspired by a song of the same name recorded by Canadian rock band Arcade Fire.

The album is composed primarily of cover songs from the soul music of the 1960s and 1970s. It also incorporates musical elements from gospel, rock, reggae, and hip hop. Songs covered for the album include "Wholy Holy" by Marvin Gaye, "Little Ghetto Boy" by Donny Hathaway, "Hard Times" by Baby Huey & the Babysitters and "Hang on in There" by Mike James Kirkland.

The only original song included on Wake Up! is the closing track "Shine", composed by John Legend.

In an interview for The Guardian, Ahmir "Questlove" Thompson of The Roots said that they intended to cover lesser-known soul songs, stating:  "…I wanted to choose cover songs that were so under the radar, so uniquely interpreted, that it would take you a second to realise that these are cover songs…”

Questlove has said that the band's instrumentation for the album is looser than on previous albums, with a jamming and "grass-roots feel". Wake Up! contains lyrical themes concerning social awareness, engagement, and consciousness. The Roots' lead MC Black Thought is featured on few tracks, as the band mostly accompanies Legend's singing with live instrumentation. Other rappers featured on the album include Common, CL Smooth, and Malik Yusef.

The album received positive reviews upon release. Jody Rosen reviewing the album for Rolling Stone magazine rated the album with 4 stars and writing “…John Legend is modern R&B's classiest male singer, bringing old-fashioned suavity to hip-hop soul; the Roots are the world's most versatile (and maybe best) band. Together, they have made a brilliantly conceived and executed album, reviving music from the Nixon-era heyday of politically engaged R&B. Bustling through funk, Philly soul and gospel, taking on songs famous (Marvin Gaye's "Wholy Holy") and obscure (Mike James Kirkland's "Hang on in There"), Legend and the Roots capture the old feeling of protest and uplift while updating the sound. They're not imitators — they're heirs…”

Check out the tracks:  “Wake Up Everybody”; “Hard Times”; “Compared to What”; “Little Ghetto Boy”; and “Shine”.

This limited edition double album 2LP record set is a 2017 reissue on orange coloured vinyl housed in a gatefold sleeve, pressed in the US and limited to 1,500 copies.