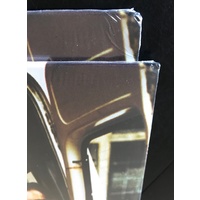 Share:
$27.90
In Stock
The remaining copies of the LP have a small dent in the top right hand corner of the album cover - see photograph attached.

Full Moon, Dirty Hearts is the ninth studio album by Australian rock band INXS, originally released in November 1993 via EastWest Records in Australia, Atlantic Records in the US and Mercury Records in Europe.

After deciding not to tour in support of their previous album Welcome To Wherever You Are (1992), the band commenced work on a follow-up studio album in late 1992. Working again with producer Mark Opitz, the album was at the Capri Studios on the Isle of Capri in Italy between November 1992 and February 1993.

All of the songs on the album were written by Hutchence and Andrew Farriss, except “The Gift”, written by Jon Farriss and Hutchence.

The album received a mixed reception from music critics upon release and peaked at #53 on the US Billboard 200 Albums chart. In the UK and Australia, the album performed much better reaching #3 and #4 respectively.

The band undertook a world tour in support of both albums from 1993 to 1994, named the “Dirty Honeymoon” tour.