Blend Inn is the second studio album by Australian surf rock duo Hockey Dad, released in February 2018 via Farmer & The Owl and Inertia.

Blend Inn is Fleming and Stephenson coming to us with more perspective after the success of their debut album Boronia (2016) saw them embark on a year of relentless global touring.

Blend Inn was recorded in Seattle with renowned audio engineer and producer John Goodmanson (Bikini Kill, Sleater-Kinney, Cloud Nothings, Death Cab for Cutie) at Robert Lang Studios. The studios, supposedly haunted, echo with their iconic past - housing many of rock’s legends over its time including The Foo Fighters, Soundgarden, Death Cab For Cutie, Alice In Chains, and most notably, Nirvana, who recorded their last song inside - the mic used in Kurt Cobain’s final studio recording still hanging in tribute. Here, Hockey Dad found a home away from home - immortalising their time in the album artwork, which depicts the house in a film photo captured by Fleming.

The album is Hockey Dad’s boldest output to date, a natural progression for Fleming and Stephenson as they face the tribulations of young adulthood, a theme reflected across the record, which features lead single “Homely Feeling”, an ode to their roots.

Blend Inn holds onto the charm and energy of youth which won hearts originally - the playfulness, the edge, that quintessential Hockey Dad surf rock sound - but it comes to us from two people with an expanded mindset.

The fast-paced, punk style of Billy’s drums is executed in perfect synchronicity with Zach's jangly guitar, anthemic choruses and ever confident vocals to give life to their unmistakable and infectious brand of rock-pop.

Check out the tracks:  “Homely Feeling”; and “I Wanna Be Everybody”.

This album is on standard black vinyl with a digital download code, pressed in Australia. 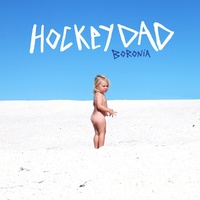