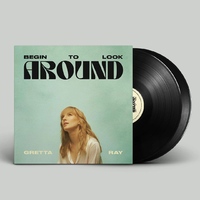 Begin To Look Around is the debut studio album by Australian singer songwriter Gretta Ray, released in August 2021 via EMI.

A wonderous and empowering coming of age record, Begin To Look Around chronicles the journey of a young artist navigating the winding lanes of womanhood, romance, heartbreak, travel and friendship.

“This record is a documentation and celebration of the lessons I have learned about love, life and my unremitting passion for music as I’ve stepped into my early twenties. It is beautiful how much you change your mind throughout those formative years; things can always be seen from a different perspective, and when you’re immersed in incredible opportunities that see you travelling the world, falling in and out of love, and losing your sense of independence only for it to return stronger than ever before, it is only natural that your view of yourself and the world will be refined when you wake up, and begin to look around.” Says Gretta of her debut collection.

This double album 2LP record set is black vinyl housed in a gatefold sleeve with printed inner sleeves, pressed in Europe via EMI.