Anthem Of The Peaceful Army is the debut studio album by American rock band Greta Van Fleet, released in October 2018 via Lava and Republic Records.

Their 2017 EP From The Fires won the Grammy Award for Best Rock Album at the 61st Grammy Awards.

The first single from their debut studio album "When The Curtain Falls", was released in July 2018 and a second single, "You're The One" was released around the time of the album's release in October 2018.

Anthem Of The Peaceful Army sold strongly upon release, peaking at #3 on the US Billboard 200, #10 on the Australian ARIA and #12 on the UK albums charts.

This album is on black vinyl with a printed insert, pressed in Europe via Lava and Republic Records. 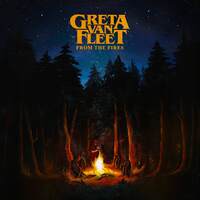