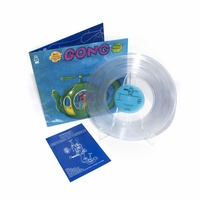 Flying Teapot is the third studio album by British progressive rock band Gong, originally released in May 1973 via Virgin Records.

Flying Teapot was the second entry in the Virgin Records catalogue (V2002) and was released on the same day as the first album by Virgin, Tubular Bells by Mike Oldfield (V2001). The album was re-issued later in that year, with different cover art, by BYG Actuel in France and Japan.

Flying Teapot was recorded at Virgin's Manor Studios, in Oxfordshire, England, and was produced by Giorgio Gomelsky.

Flying Teapot is an avant-garde collection of sound effects, jazzy improvisation and comic vocals, all displaying the group's sense of humour and wacky approach to their music. "The Pot Head Pixies" and "The Witch's Spell" are perfect examples of their unique musical style.

It was also the first album to feature the psychedelic music innovator Steve Hillage, who would go on to become a full band member for the following two albums from the Radio Gnome Invisible Trilogy.

This album is a 2019 reissue on 180 gram “invisible” clear coloured vinyl housed in a gatefold sleeve with a 16 page booklet, featuring remastered audio, pressed in the UK via BYG and Charly Records.